We have had a fairy cool summer in Michigan this year, and the garden definitely reflected the temperatures. I had planned to can my tomatoes, but I really haven't been able to harvest enough at one time. I decided that I would freeze them. It is so easy! The National Center for Home Food Preservation has tons of information on preserving foods, including freezing. The section on freezing tomatoes is here. However, I don't like to remove the skins from my tomatoes because of the nutritional benefits of retaining the skins. I also decided it would save me time and grind the skins better if I used a blender.

Here is what you need for my method:
Pick the tomatoes (or buy them at great deals when they are in season). Aren't they pretty? 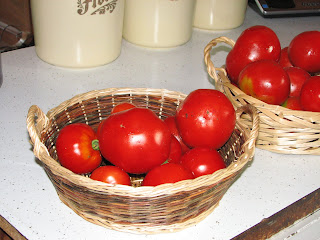 Wash, core, and quarter or halve the tomatoes. If you have a powerful blender, then you can probably skip the quartering or halving. Note: I wash all of my tomatoes and put the first couple in the blender while I core the rest of them. I have to start with a couple of quarters, but as the blender gets full I can halve them and sometimes even leave them whole. 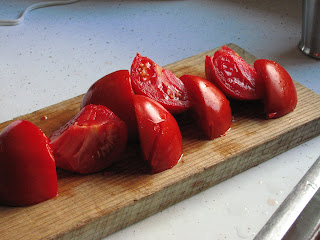 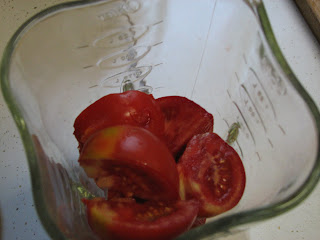 Blend the tomatoes thoroughly; this is especially important if you are retaining the skins. I add my blended tomatoes to the pot as I go and keep blending in batches until they're done. If you are not going to cook your tomatoes, then you can pour them directly into freezer containers at this point. Don't forget to leave headspace in your containers! 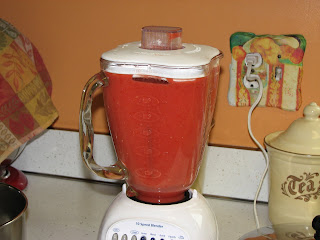 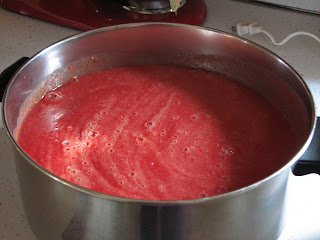 Add the blended tomatoes to your pot, heat them up on medium for about 10-15 minutes and then turn them to low or medium-low until they are cooked down to a tomato sauce consistency. This takes a while depending on the temperature you choose. You really don't have to cook them at all, but I like to cook mine down because I don't have a ton of freezer space.

This is what it looked like after I cooked it down: 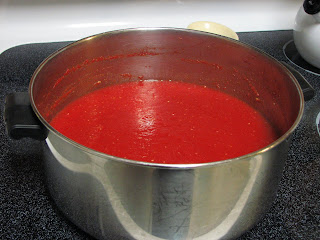 I cooked it a little longer than usual and ended up with something between tomato sauce and tomato paste. That works well for me, though, because I have tons of chicken broth and produce in my freezer right now and this will take up a bit less space. This batch of tomatoes gave me 2 3/4 quarts of thick sauce.

It took me under 20 minutes to prep the tomatoes from picking them to clean-up. I cooked them on low for a couple of hours, let the pan cool while we ate dinner and cleaned up the kitchen, then put the whole pot in the refrigerator to cool the rest of the way. I transferred the tomato sauce to freezer containers the next morning, making sure I left enough headspace.

Interested in saving some of your tomato seeds before preserving? Go here for directions.

Now I want to work on a lacto-fermented tomato-vegetable drink. Has anyone done this before?

Andrea
I am a Christ-following, book-loving, home schooling wife and mother who wants to be available to serve my Savior in my family, home, church, and wherever He chooses to send me.